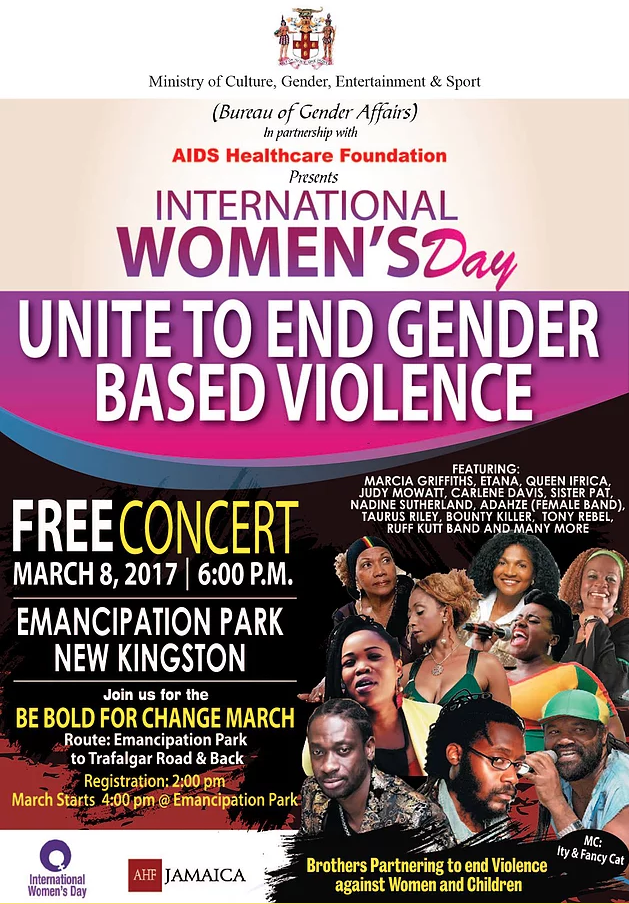 KINGSTON – “We can end the violence; it requires all of us to end the violence.” Those words, spoken by the Minister of Culture, Gender, Entertainment and Sport, the Honourable Olivia Grange, sum up the Administration’s central message on addressing the hideous crime of gender violence, especially violence against women and children. Embodied in the Minister’s statement — which is guiding policy and the development of gender initiatives in the Ministry — are two important positions.

First, violence against anyone (women, girls, boys and men) is not inevitable. The violence does not have to happen and therefore it can be stopped.

Second, each person, without exception, has a role to play in eliminating gender violence. Minister Grange has made it clear that “all men and all women can contribute and must be engaged” in what she considered to be a national project to end gender violence and promote healing in families.

The Ministry is using various methods to engage with members of the public: from one-on-one or group sensitization sessions in communities to campaigns on social and traditional media.

International Women’s Day on March 8 provides the Ministry with an opportunity to engage directly with members of the public who do not pay attention to gender issues, who consider domestic violence to be normal, who consider certain acts of violence against children to be acceptable and even desirable.

In addition to the usual activities that celebrate achievement and highlight the state of women in Jamaica, the Ministry is, with support from the Aids Healthcare Foundation Jamaica and various other partners, organizing a march and concert on International Women’s Day to call the nation to action to end gender violence.

The concert is both a public education activity and part of a process of healing a nation traumatized by acts of violence. In this regard, women and men have been invited to appear on the programme to speak candidly about their gender violence experiences. The Ministry is grateful to those who have agreed to reveal their pain and/or their regret on this public stage.

The Ministry expects that these testimonials will have two main effects: empower men and women to leave abusive situations and take action against their abusers, as well as encourage abusive men and women to recognize that they have a problem and to seek help. All decisions about the planned International Women’s Day concert at Emancipation Park, New Kingston on March 8 were made with these outcomes in mind as well as how to effectively reach the various target audiences.

We must be bold to bring about change. It is time we all take a stand — even past abusers who recognize they had a problem and have taken steps to change behaviour; and anyone who has ever used violence to discipline a child.

In the spirit of unity, the Ministry invites the public to the Free Concert at Emancipation Park on March 8 will begin at 6:00pm. The concert will follow the Be Bold for Change March, starting at 4:00pm, from Emancipation Park to Trafalgar Road and back. Registration begins at 2:00pm.

The line-up also includes several male entertainers who have answered the call to join the movement to end violence against women and children. Among them are: Tony Rebel; Razor B; Tarrus Riley; Ruff Kutt Band; Ity & Fancy Cat; and Bounty Killer, with a special message against domestic violence.

Women in solidarity for a violence free Jamaica